My Oregon road trip was nothing less than amazing. Oregon truly NEVER disappoints. We went late April and had good weather without many people at the locations we went to. Josh and I drove for hours and hours loosely following a schedule we made. Follow along for my Oregon road trip guide.

If you could learn more about any one thing, what would you choose? I know what’s at the top of my list. I mean, sure, there’s plenty of practical things I could study, diseases I could cure. My first great big discovery would have to be what it is about road trips that makes them so magnetic. So alluring. So irresistible.

Maybe it’s something about the open road. An open road means endless possibility, endless opportunity. A way I think we all could stand to look at our lives. Or maybe, it’s the freedom. Most road trips don’t have a hard-set plan, and no real deadlines. You’ll learn to embrace spontaneity, going with the flow. Allowing the journey to take you, instead of vice versa.

Whatever it is, I’m a sucker for a good adventure, and my Oregon road trip was no exception. If you enjoy taking photos, Oregon has no shortage of options. There are an abundance of coastal and southern Oregon photography locations to choose from.

There’s plenty you can learn about Oregon with just a quick search. It’s a big state in the Northwestern corner of the US. Oregon stakes claim to the country’s smallest park, but the most strip clubs. And the most ghost towns (eeek!). The deepest lake lives in Oregon, not far from the biggest mushroom of all time.

The sort of weather varies by the area. The coast is a little more temperate and wet, whereas the east can be colder and drier. There are mountains, coastline, endless trees, and enough nature to make you drool.

What you can’t find online is: what Oregon feels like. That’s something I had to figure out, so naturally, I took a road trip. Traveling across the state gave me a feel for each part – its magic, uniqueness, and indescribably beauty.

Sure, it’s not in Oregon. Mt. Baker is actually in Washington State, and is the third highest mountain the state houses. But, it was on our way to Oregon, so naturally, I made this world wonder a stop on my Oregon road trip.

Despite it being one hot hill, Mt. Baker hasn’t had any eruptions in thousands of years, so I wasn’t too scared to check it out. And wow, am I glad I did.

However, even in April, the snow on the side of the road was still about 5 feet tall and the lake we wanted to visit was frozen. We will have to make our way back in the summer.

You might also like California Road Trip – Gold Country, 16 Instagrammable Hot Spots Around the Southwest or 6 Places To Visit On A Colorado Road Trip.

We spent the night in Seattle and then in the morning we made our way to Cannon Beach… which is one of the most classic (and most photographed) beaches on the coast. Cannon Beach is a breath-taking place, but don’t take my word for it – Nat Geo named it one of the top 100 beautiful places in the world. And it seriously did not disappoint.

It’s not your average beach. Sure, you’ve got the sand and the ocean; but you’ve also got large rock formations towering on the horizon, and mountains behind you as far as you can see. The view is unlike any other beach I’ve been to. Something about it just feels magical and other-worldly.

An hour and a half away from Cannon Beach is Cape Kiwanda which is where Josh and I stayed that night. We rented the cutest Airstream at Harts Camp. It was really spacious (for a trailer) and it is minutes away from the beach. April weather was still a bit too chilly, so I didn’t get to use the adorable outside shower they have but I will have to try it out next time. cute!

Cape Kiwanda is dangerously beautiful. And I’m not being dramatic – at least seven people have died falling on the rocks or in the ocean since 2007. The park is a short hike up a sandy hill to a peak of sandstone that stretches out up against the coastline, giving you insane views.

Sandstone is one of the softest rocks and can literally crumble from beneath you, so I didn’t hike out to the end. Also, because there are fences up to keep you from risking your life for the ultimate selfie. But rest assured, you’ll still be wowed without having to cross any boundaries.

The cliff were these images are taken is just up the sand hill at the end of the beach. Definitely don’t miss the view from here.

A huge thank you to Josh for all the images and coming with me on this trip!

You can’t really say you were at Cape Kiwanda unless you watch the sunset and have a fire with s’mores.

You can watch my Oregon road trip vlog below or on YouTube for better quality.

The Oregon coast has a lot to offer so make sure you stop at all the hidden gems along the way. Josh and I were lucky and found this hill side with the view of the water and it had wild flowers….bonus!!!

Samuel H. Boardman State Scenic Corridor is a must see. Through spruce trees, past beaches, and with a natural bridge added for good measure, the Samuel H Boardman State Park on the Oregon Coast is truly a stop that has it all.

The entire trail is about 12 miles long, but if you’re not up to the whole thing (I don’t blame you!), the Natural Bridges and Arch Rock should be your priorities.  It’s crazy to see what rocks erode into after thousands of years of water. I love nature.

It is about a 5 hour drive from Cape Kiwanda but I believe it is worth it for the view. You can see itty-bitty me in this photo. To get this spot the person will have to do a bit of scrambling up the hill.

That was the end of the coast part of our Oregon road trip. We headed inland for more sights. I suggest staying in Roseburg for the night after the natural bridge as it is a 3 to 4 hour drive inland.

Up next on my Oregon road trip is the Umpqua Hot Springs, for an old-fashioned natural soak. It was a short hike up to the pools, which are situated on a hill. Chill hill, hot springs.

These hot springs are pretty small, so either get there early or be ready to share. But once you get settled, you can relax with a view of the forest, the stream beneath, and the sky above. And to feel softer than ever before once you get out. It’s a great way to take a breather and do a little self-care while still exploring.

This was my second time at the hot springs. I went last year with Joel and I realize now that I never did a blog post about that trip. I will have to do that soon!

The Painted Hill aka John Day Fossil Beds National Monument are non-negotiable if you’re doing your own Oregon road trip. Like seriously, if you go nowhere else on this list, make sure you go here. It’s otherworldly.

The painted hills are big soft rocks stretch across the horizon, donning stripes that show you layers of earth from before time began. It’s like a sunset, painted on the rocks, with more beautiful sky as a backdrop. Easily one of the most magical places I’ve ever been, so it makes sense that this is one of the 7 Wonders of Oregon.

I have heard it is best to see early in the day or after a rain because the colours are brighter.

Up next is the Rowena Crest Viewpoint, a pretty well-know trail near-ish to Portland with an even better-known view. There are options on how to hike up to the view, but the real reward is at the end: a view over the horse-shoe-shaped road, and luscious Oregon landscape as far as the eye can see.

The view of the Columbia River Gorge is an easily-earned reward, too. None of the hiking options are too steep or long, which means this is a great stop for those of us who aren’t as “naturally inclined”.

We didn’t make it here as I was starting to not feel well, so we began our trip home earlier than initially planned. Next trip I plan to make it to the Rowena Crest viewpoint in Oregon’s Columbia Gorge. The view here is definitely photo worthy!

The last stop of my Oregon road trip was Toketee Falls. It’s a great choice to finish everything off, honestly. Toketee falls at the end of a pretty short hike, so you’ve got no excuse to miss it. And the result is wild. There’s a reason it’s one of Oregon’s most popular waterfalls.

When you take the short hike through the towering trees, you’ll hear it before you see it. Coming down 118ft, this waterfall is no joke. The sound of rushing water, the splashing below into the crystal blue pool, the mist that surrounds you when you’re here – all make this one of the most magical spots.  If you’re up to it, cool off with a little dip in the water and really become one with nature.

Oregon is filled with amazing waterfalls. You can see a post from an Oregon waterfalls road trip that I took previously.

So many miles came together to make my Oregon road trip possible. It was a lot of time on the road, and it wasn’t easy by any means. But you know what they say: things worth having don’t come easy. And I’ve never found that more true.

Road tripping isn’t a comfortable vacation, and it’s not the most luxurious either. That being said, I wouldn’t trade it for the world. The places I got to visit, and the things I’ve seen, are memories I’ll treasure for a lifetime.

My wish for you is that you get to do the same if you ever get the chance. Because, trust me – you won’t regret it. It’s truly the trip of a lifetime. 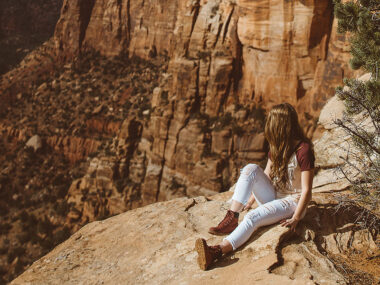 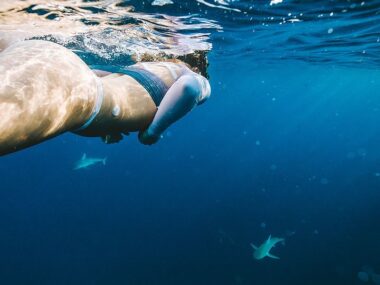 Swimming with Sharks in Hawaii – One Ocean Diving Oahu