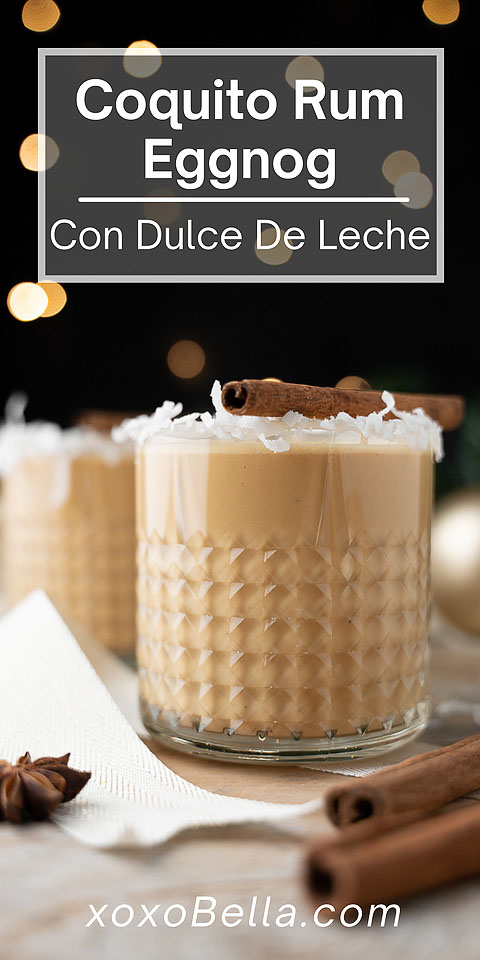 Eggless coquito con dulce de leche is a Puerto Rican rum eggnog with rich, creamy flavours. With the festive period getting ever closer, what could be better than coconut eggnog cocktail? This homemade coquito recipe without eggs combines the tropical flavours of Puerto Rico with the timeless charm of eggnog. Cheers! Or should I say ‘Salud!’

This is a coquito recipe without eggs so if prefer not to have raw eggs (like in traditional eggnog) this recipe is a good fit. You will need evaporated milk, coconut cream, dulce de leche, rum, vanilla, and cinnamon, as well as several ingredients for the coconut rim.

This eggless coquito con dulce de leche doesn’t call for a lot of ingredients and it’s pretty simple to prepare. You need evaporated milk, which is basically milk with most of the water content removed.

Next up, you will need coconut cream. This should be unsweetened, so don’t try using cream of coconut instead because it won’t work! Look in the international aisle in the grocery store (not the cocktail aisle, which only sells the sweetened kind).

Dulce de leche, which is caramelized milk, is the next ingredient in the list. This might be in the canned milk area of the grocery store or the Hispanic food section.

Next up, choose your favourite white rum. To keep this Puerto Rican rum eggnog authentic, use Puerto Rican rum if possible. Bacardi would work fine. If you prefer spiced or dark rum, they’d also work in the recipe. You’d get a richer flavour this way too. Ground cinnamon and pure vanilla extract are the last ingredients in this coconut eggnog.

How to Prepare Homemade Coquito

The actual Puerto Rican rum eggnog is really easy to make. All you have to do is put the ingredients in a blender and blend until well mixed. You don’t have to give it that long – about 20 seconds should be fine. Now chill it for an hour in the refrigerator.

When you’re ready to serve the eggless coquito con dulce de leche you need to dip the rims. Put the coconut flakes on one saucer and the water, cinnamon and sugar in another.

First roll the rim of each glass in the sugar mixture then into the coconut. Give the coquito recipe without eggs a good stir then divide it between the serving glasses. You can finish off this best coquito recipe with a cinnamon stick if you like.

How to Make Dulce de Leche

Don’t worry if you can’t find dulce de leche. It’s a key ingredient in homemade coquito but you can make your own. Take the label off a can of sweetened, condensed milk and submerge it in water in a pan. Simmer it for a couple of hours adding more water whenever necessary. Use tongs to take the can out of the water and let it cool completely before opening.

How to Store this Coquito Recipe without Eggs

This can be frozen for up to 2 months or refrigerated for up to 5 days. I’m sure it won’t last that long though! Just remember to give the coconut eggnog a good stir before serving because the ingredients will separate a bit.

What Does ‘Coquito’ Mean?

I don’t know about you but whenever I’m trying a new cocktail I love to know more about it. Take the best coquito recipe for instance. What’s the history behind it? Well the word ‘coco’ means coconut in Spanish, so ‘coquito’ means little coconut.

It’s an alcoholic cocktail based on rum and coconut. You might see it advertised on social media around the holidays but it’s illegal to sell alcohol without a license, so don’t be tempted. Why would you buy it online when you can make eggless coquito con dulce de leche yourself so easily anyway?

This cocktail is popular in South America during the holidays, especially in Puerto Rico. You can find similar coconut-based cocktails all over the Caribbean. Some people claim the Spanish brought their own version of eggnog to Puerto Rico and added the local rum, while others say there’s no way of knowing the history of coconut eggnog. 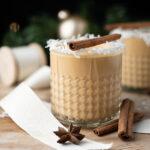 For the Flaked Coconut Rim:

For the flaked coconut rim

This eggless coquito con dulce de leche is traditionally served in a shot glass after dinner. Some recipes use eggs while others don’t. This sweet, strong drink is perfect for the holidays, especially since you can whip up a batch in advance! Let me know if you try this homemade coquito recipe! 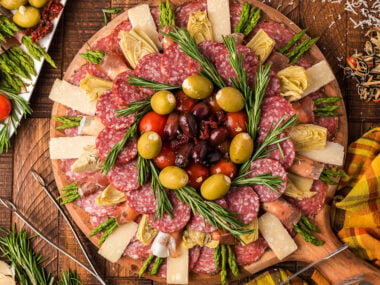 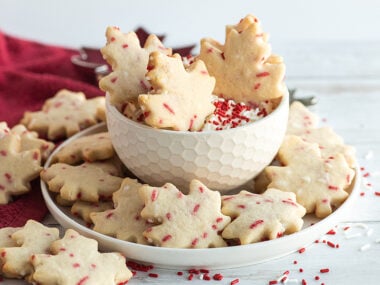 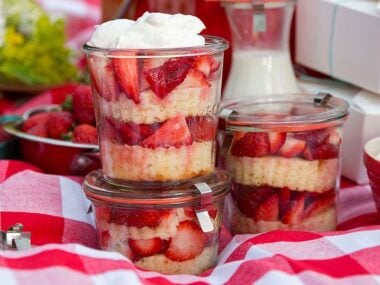