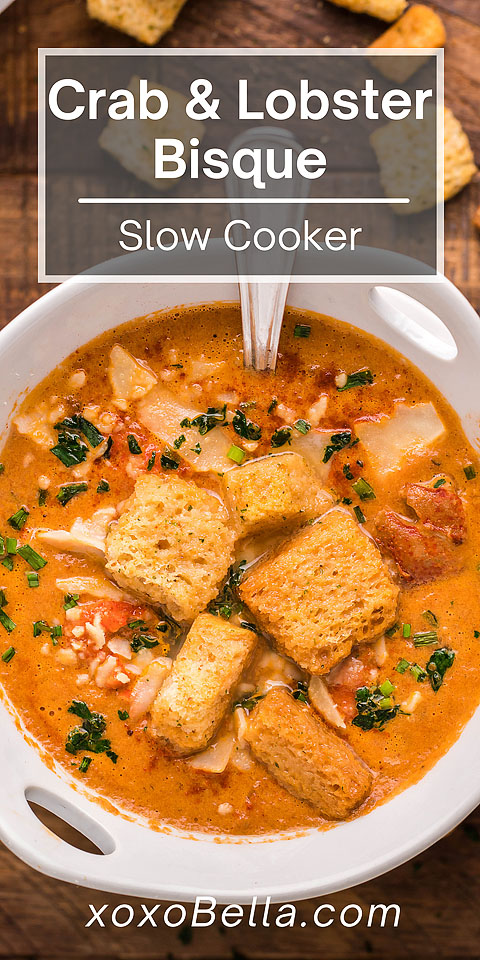 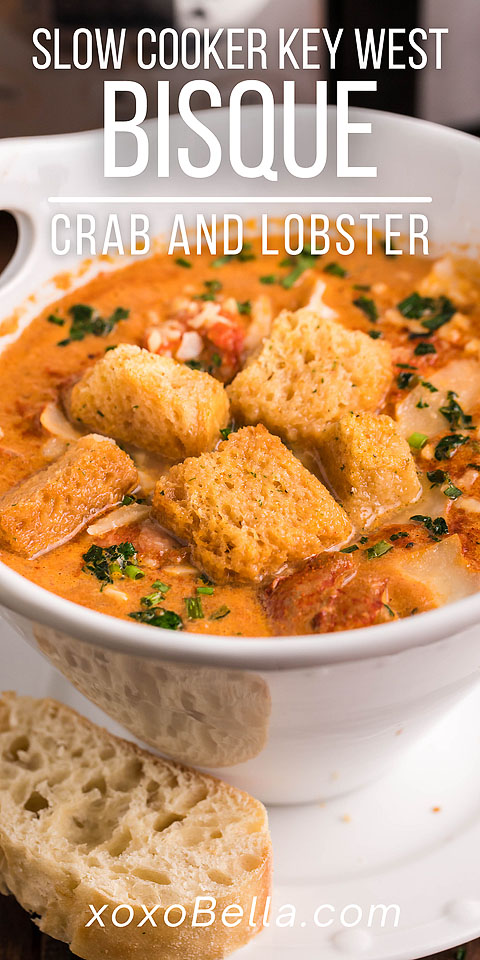 Not only is this slow cooker Key West crab and lobster bisque easy to make but it’s supremely satisfying too! Every mouthful of this crockpot seafood bisque boasts seafood flavours and a rich, creamy texture you will love. This creamy seafood soup is the best bisque recipe, so add it to the menu soon!

This elegant seafood crockpot meal includes lobster as well as crab. Tomato bisque with crab and lobster makes an impressive lunch or appetizer if you have company over.

Don’t worry if you haven’t worked with fresh seafood much before. You can buy prepared lobster and crab meat so you don’t have to dissect any animals yourself!

There are quite a few ingredients in this best bisque recipe but nothing that’s hard to find. First of all you’ll need seafood. You can either buy a cooked lobster or cook your own or simply purchase lobster meat which is removed from the shell. The same applies to the crabmeat. Oh, and you also need a couple of small lobster tails.

Now I did use the lobster shell to make the broth. It gives a more intense seafood flavour to the bisque and is discarded after. However, if you don’t have the shells that is fine. You can just omit the shell from the recipe.

I know you can get seafood alternatives like ‘krab’ or surimi. However, with such a classy, full-flavoured soup, I’d really recommend using fresh seafood for the most delicious result!

The shallot, garlic, Old Bay seasoning, red pepper, garlic and onion powders, and chopped chives add a wealth of flavours to the seafood crockpot meal. You will notice none of these ingredients are especially strong or spicy. That’s why we are using these, since you won’t want to overpower the delicate seafood taste.

You can make any changes to this crockpot seafood bisque you like. I already touched upon your options for the seafood. You could also sub chicken or fish broth for the veggie stock. Yellow or white onion would be alternatives to the red onion and shallot.

As for the Old Bay Seasoning, Cajun seasoning is similar (but not quite the same). You could also just use some of the components in Old Bay seasoning, such as seafood seasoning, celery salt, paprika, and chilli powder. Use your judgment when preparing this seafood crockpot meal and I’m sure it’ll come out really tasty.

So how do you make tomato bisque with crab and lobster in a slow cooker? First of all you should remove the seafood from the shells. Be careful not to leave any bits of shell in there!

Fry the lobster shell (yes the shell!) in oil then add the celery and red onion. Turn the heat down, add the stock (broth) and then sieve out the solids. Combine the garlic and shallot with the butter and vinegar and add this to the broth. Then you can add some pieces of lobster tail.

Next in the best bisque recipe, it’s time to get the crockpot out! I’ve been playing around with Instant Pot recipes more than crockpot ones as of late, but this slow cooker key west crab and lobster bisque develops a lot of flavour in there, so it’s definitely a crockpot recipe.

Add the prepared broth to your crockpot along with the tomatoes and seasonings. Give the mixture 5 hours on low without removing the lid.

You can add the lobster tails half an hour before the end. When they turn red, this means they’re done. Chop the seafood from the refrigerator and season with Old Bay seasoning.

Use an immersion blender to mix the soup mixture then stir in the cream, chives and prepared seafood. Yes you can use a regular blender but this soup is hot and you don’t want to blow the lid off with the steam! This can be painful and messy, so if you have an immersion blender (stick blender) use that instead.

I like to add croutons, parmesan and parsley as a garnish when making slow cooker key west crab and lobster bisque. Since this is the best bisque recipe I ever tried it’s worth taking care with the recipe, checking the flavours as it progresses, and adding an elegant garnish.

How to Serve the Best Bisque Recipe

Ladle the crockpot seafood bisque into serving bowls and serve hot. You might like to have crusty bread alongside this slow cooker creamy seafood soup either along with, or instead of, the croutons. 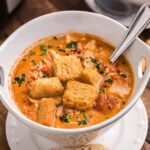 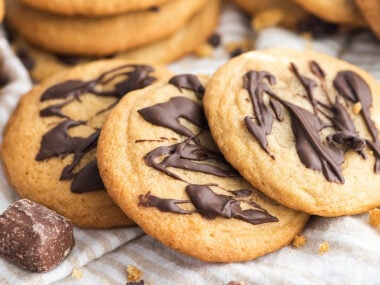 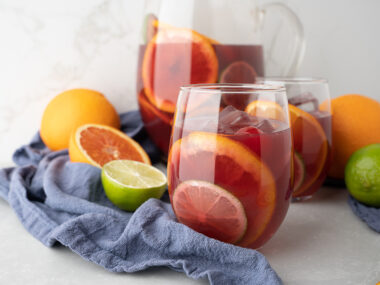 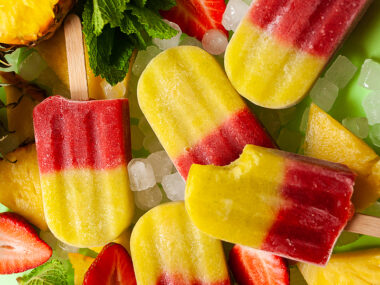