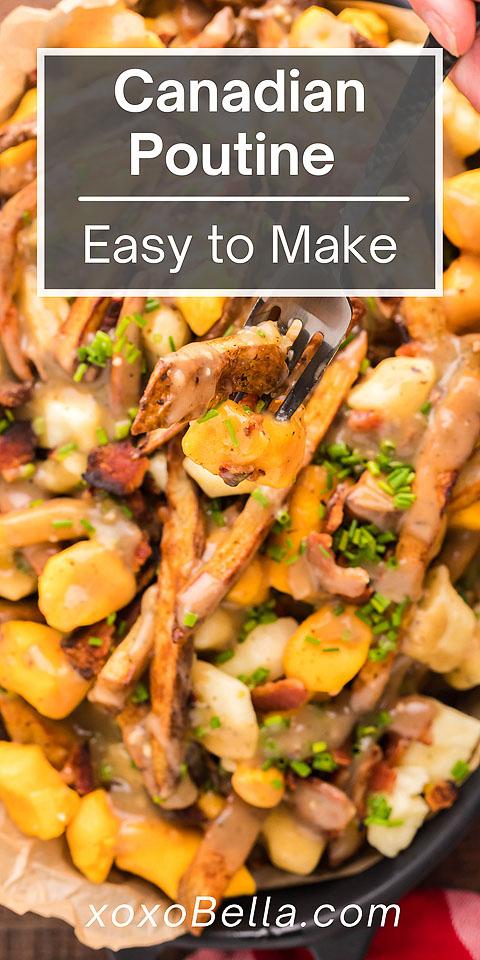 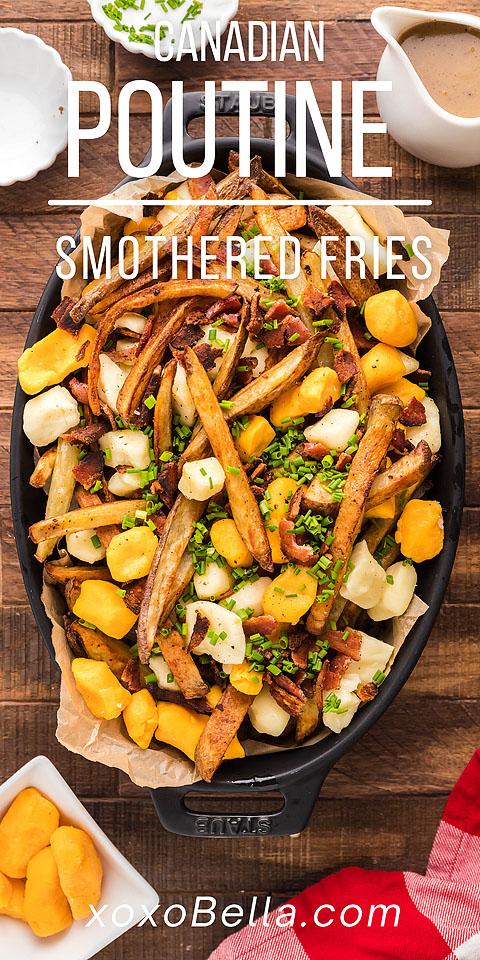 Think of Canada’s most beloved dishes and Canadian poutine is sure to come up. Smothered fries with cheese curds, bacon and gravy is such an incredible comfort food dish. It’s a winning snack for this upcoming Canada Day. Read on for all the details for how to make poutine and the best poutine gravy recipe (that can even be made gluten free)! This delicious poutine recipe with meat will be DEVOURED, so make lots!

If you know how to make poutine you can prepare this amazing poutine recipe with meat and enjoy all the fantastic flavours. Served hot, this is guaranteed to impress everyone.

This Canadian dish dates back to 1950s Quebec and is now popular all over Canada as well as in the northern US (where it is sometimes referred to as Disco Fries). The word ‘poutine’ refers to ‘mess’ in slang Québécoise. And it’s true – this isn’t the most elegant looking dish! Aesthetics aside, you will love this staple of Québécois cuisine!

There are 3 different restaurants in Quebec all claiming to have invented Canadian poutine, so the exact origin isn’t clear. The dish was first served in basic diners, hockey areas, food trucks, and pubs. It was a popular snack in the dairy area of Quebec because of the fresh, tasty cheese curds.

In the 1970s it was served in La Banquise and Burger King with cheap cheese. The reputation of the dish declined when this happened of course. It then became synonymous with greasy food after a long night of boozing.

As the 2000s started, the dish once again started catching our attention, as famous chefs made gourmet versions. Everyone wanted to try new techniques and make the best poutine gravy recipe.

There are different ways to make smothered fries with cheese curds, bacon and gravy. In fact the bacon doesn’t always make an appearance. I do love a poutine recipe with meat though, and who can say no to bacon?

The following Canadian poutine recipe is currently my absolute favourite. As a Canadian, I’m no stranger to this dish! A classic poutine recipe, if I had to generalize, would be medium-thick French fries (double-fried for crispness) topped with cheese curds. The size and amount of cheese does vary. And then you have the best poutine gravy recipe on top. The gravy does have to go on top of the cheese curds, so they melt a little.

This is traditionally chicken gravy which is thin and light, although sometimes a combo of beef and chicken stocks is used. That would be darker in colour. You can get vegetarian gravy too.

I like to use russet potatoes – they make such tasty fries! After tossing them with seasonings you can bake them in the oven. To make the best poutine gravy recipe you will need a number of ingredients including bacon, garlic and shallot.

Cheese curds and bacon go on top of the hot fries and then the delicious gravy. Served hot, this Canadian poutine is certain to impress!

Should I Fry or Bake Fries for Poutine?

After reading this Canadian poutine recipe, you might be curious about the fries. Knowing how to make poutine means knowing how you like your fries. For me, baking them produces a great result without having to use a deep fryer. But there are more options!

Whether you make your French fries in the oven, in a deep fryer or even in an Instant Pot, they should come out hot and crispy. It’s up to you whether or not to peel the potatoes first.

Some people prefer peeled while others like unpeeled. It’s totally your call. Just make these smothered fries with cheese curds, bacon and gravy however you want.

How Do I Reheat Poutine?

First things first – you are very unlikely to have leftovers. This recipe is just so good! If you do though, it is possible to reheat a poutine recipe with meat. Or without meat!

So first preheat the oven to 300 degrees F and put the leftovers on a foil-lined baking tray. It will take about 10 minutes to warm back up, depending on your oven and how much Canadian poutine you’re reheating at once.

The fries will become softer reheating them in the oven. If you have fries without the curds and gravy on to reheat, you can heat them up in an Instant Pot. That way they’ll come out crispy!

Knowing how to make poutine means you can serve wonderful smothered fries with cheese curds, bacon and gravy this Canada Day. The mouth-watering combination of crisp fries, squeaky cheese curds and meaty gravy (and bacon!) is just so good. 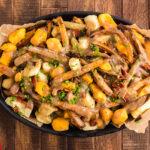 Course: Side Dish
Cuisine: Canadian
Keyword: Canada Day
Prep Time: 15 minutes
Cook Time: 25 minutes
Total Time: 40 minutes
Servings: 9
Calories: 278kcal
Author: Bella
One of Canada’s most beloved dishes is Canadian poutine. Smothered fries with cheese curds, bacon and gravy is an incredible comfort food dish. Read on for all the details for how to make poutine and the best poutine gravy recipe (that can even be made gluten free)! This delicious poutine recipe with meat will be DEVOURED, so make lots!
Print Save Saved!

You can serve poutine just as it is or pair it with roasted root veggies like carrot, turnip and parsnip. They contrast beautifully with the fries. Maybe you’re making a bunch of different Canadian recipes for Canada day though. In that case, Canadian poutine can certainly take pride of place at the buffet table.

Let me know If you try to make this Canadian poutine recipe with meat. These smothered fries with cheese curds, bacon and gravy are highly addictive and delicious! Once you learn how to make poutine and this BEST poutine gravy recipe, you will be making this side dish often. 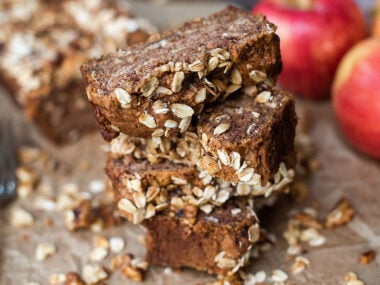 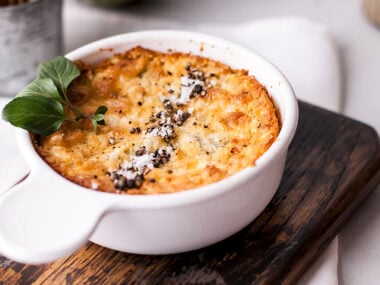