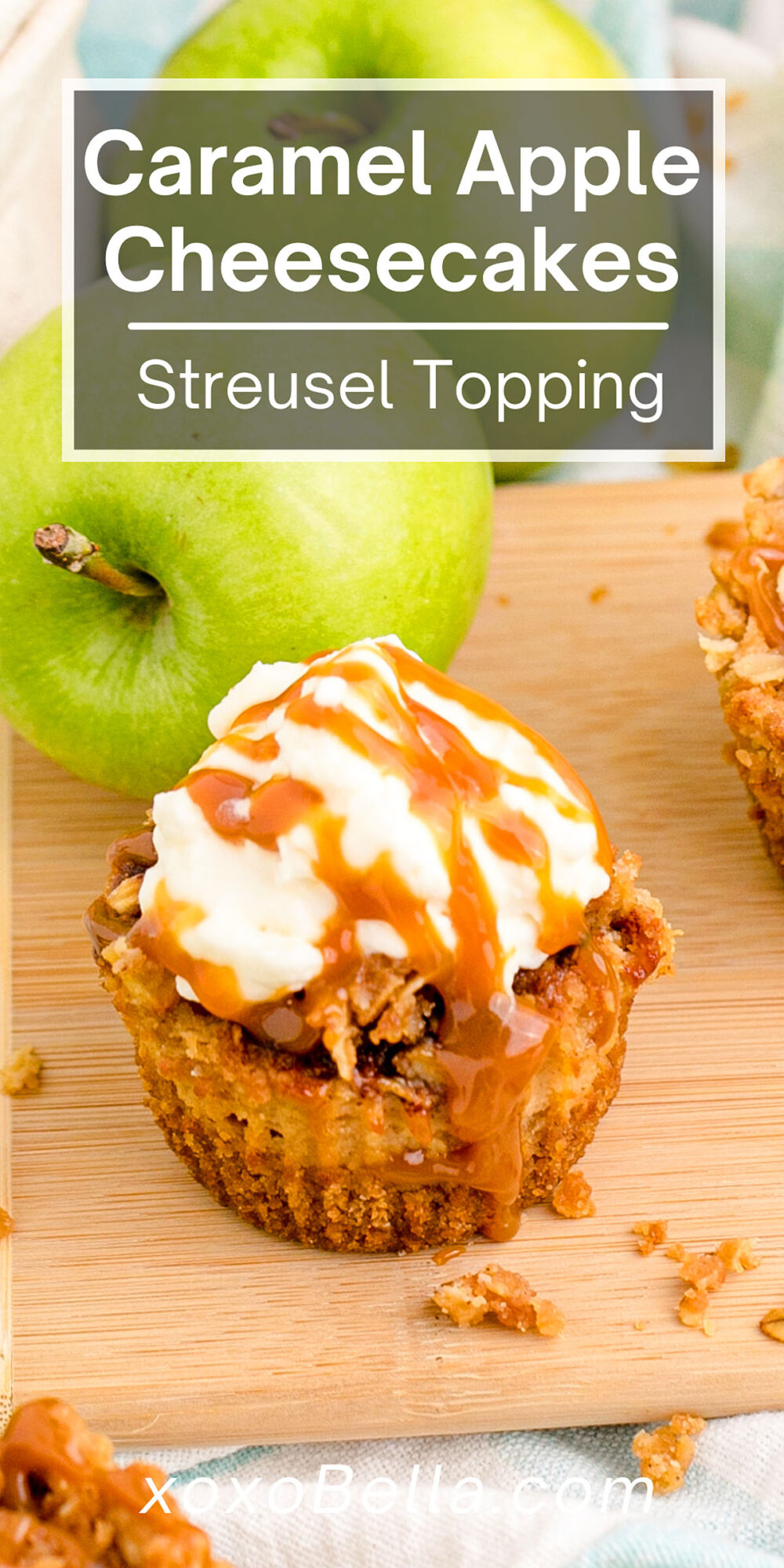 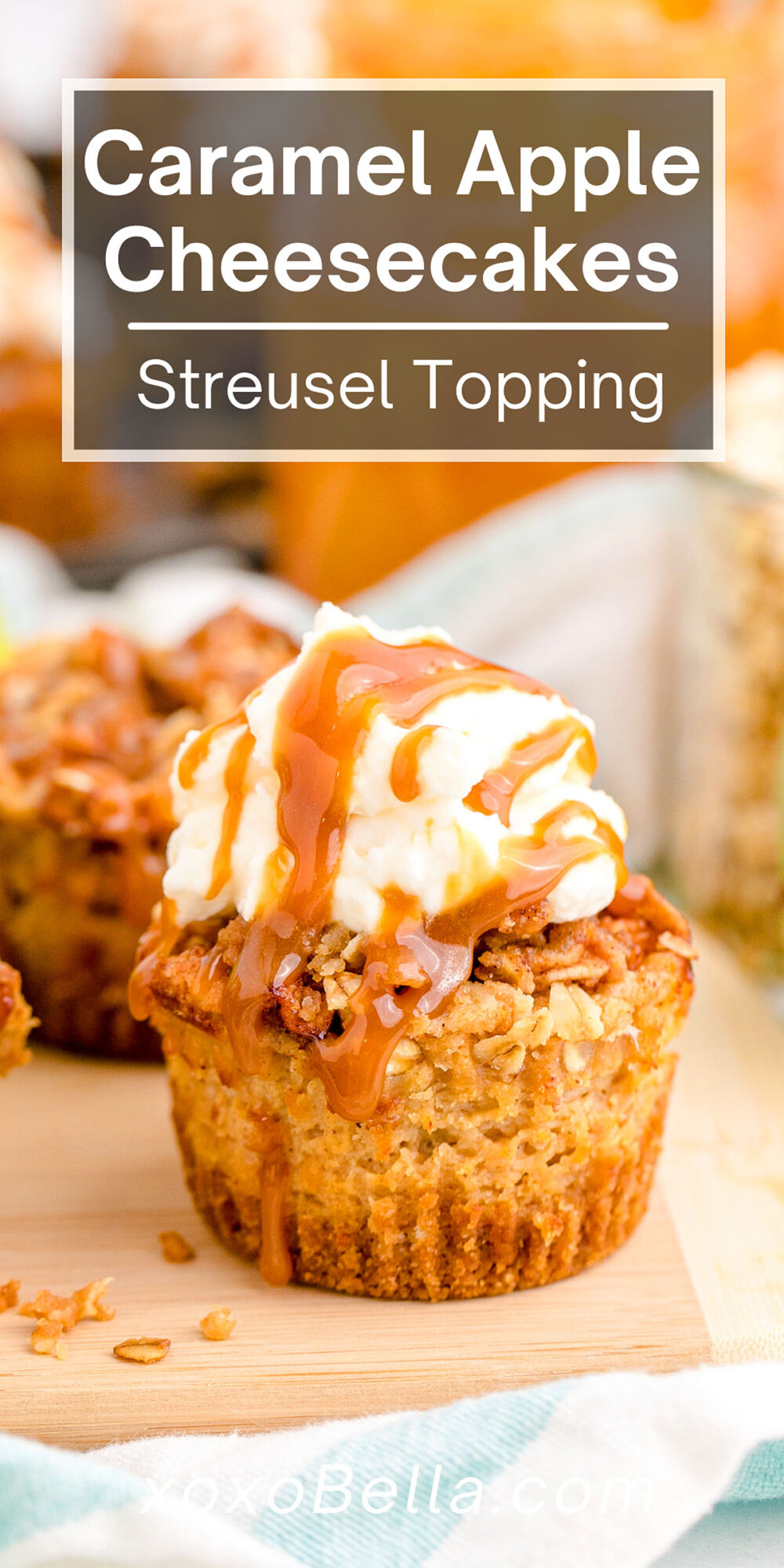 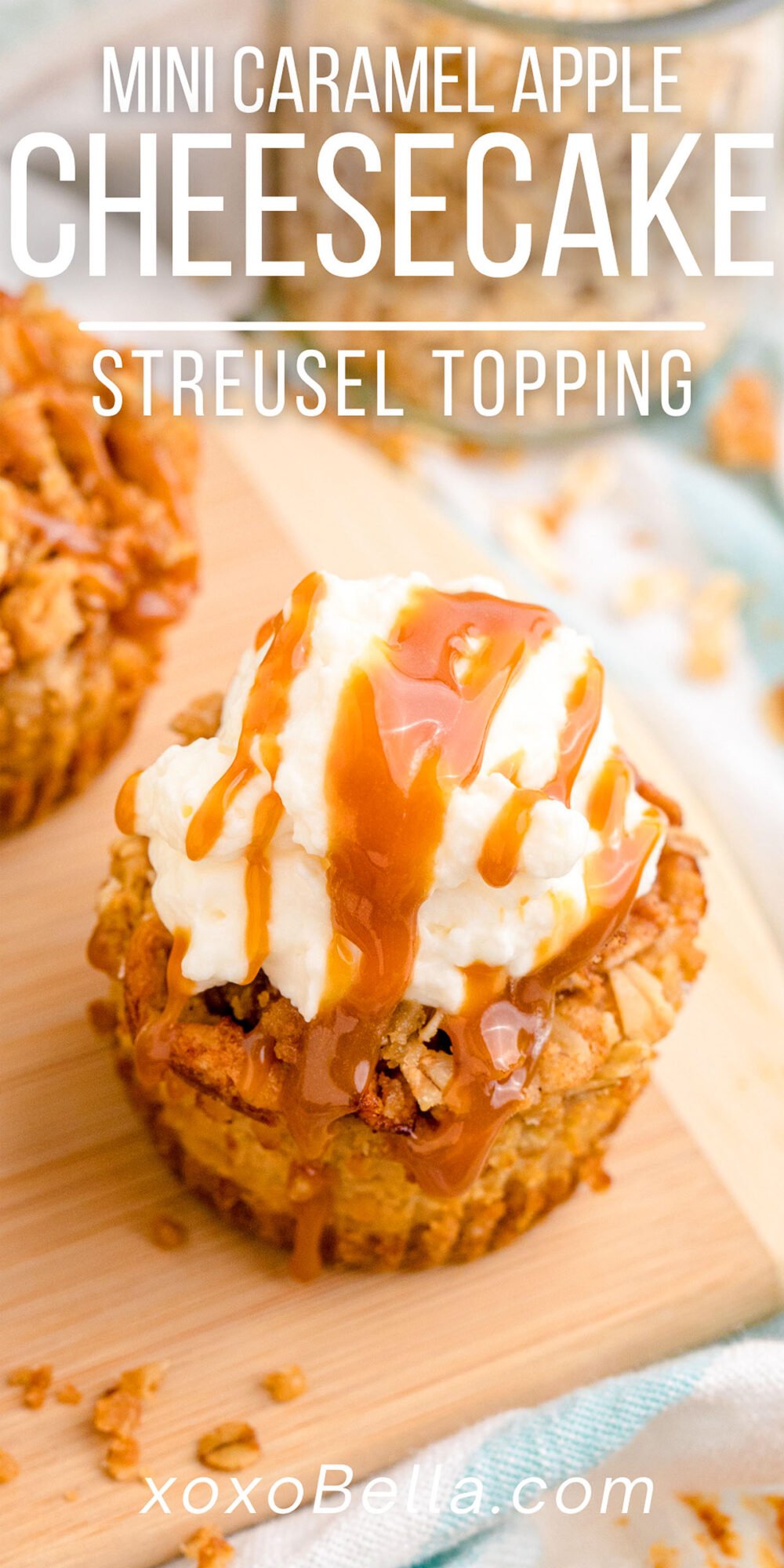 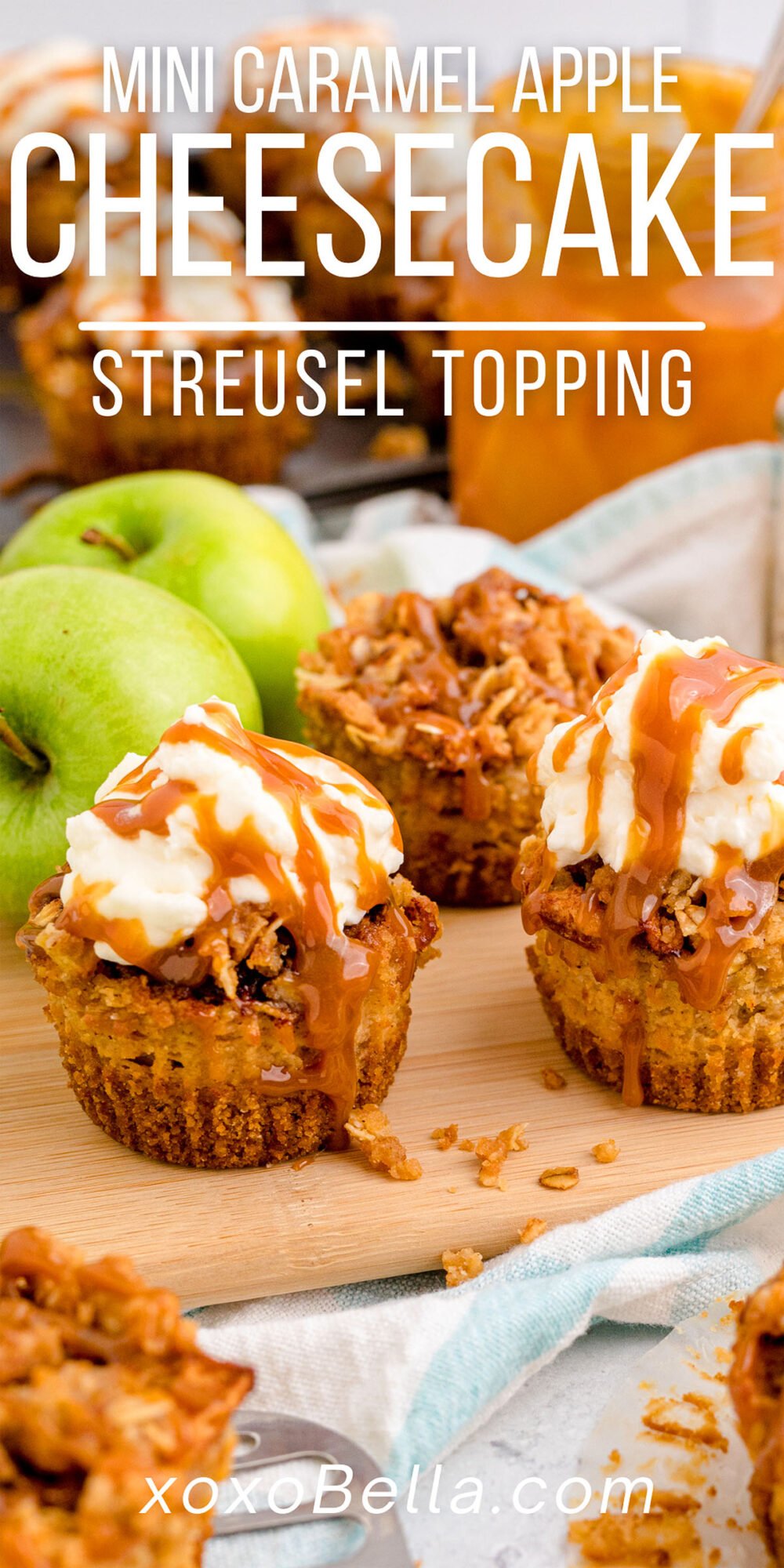 Serve up these mini caramel apple cheesecakes with streusel topping and lap up the praise! That’s right – they boast an incredible flavour and they look so cute. Everyone is going to love these little treats and don’t be surprised if they ask you for the recipe too! These tasty cheesecake bites with an apple topping are the perfect autumn treat.

The crust for these cheesecake bites is a combination of sweet graham cracker crumbs, melted butter and brown sugar. You can use another kind of cookie crumbs if you prefer or else you could swap the brown sugar for white or even use artificial sweetener.

The filling is a creamy concoction of cream cheese, Greek yogurt, egg, caramel sauce, brown sugar, vanilla, and cinnamon. Swap the cinnamon for nutmeg if you prefer it.

The apple topping calls for cinnamon, sugar, flour, butter, and oats, as well as the apples. I love the tart, crisp flavour of Granny Smiths in these mini caramel apple cheesecakes with streusel topping. You can use any kind of apples you like though, such as Honeycrisp, Golden Delicious or Ambrosia.

Finally, you might like to add whipped cream or ice cream, as well as more caramel sauce, to serve.

How to Make Apple Cheesecake Bites

First of all, mix the crust ingredients together and divide the mixture between 12 greased muffin cups, pressing it down evenly.

Beat the cream cheese until fluffy using an electric mixer. Next, add the yogurt, egg, caramel sauce, sugar, vanilla, and cinnamon, and beat some more. Divide this mixture between the muffin cups.

Toss the peeled, sliced apples with brown sugar and cinnamon in one bowl. Mix the flour with sugar, oats, and cinnamon in another bowl, cutting in the butter with a pastry cutter or fork. A potato masher would also work here.

Divide the apple mixture between the muffin cups followed by the streusel topping. Bake the Fall cheesecake recipe for half an hour, then chill and serve with ice cream or whipped cream if you like (or some of each!)

Oh, and if you have any apples left over, why not try making Fireball apple shortcakes next?

How long will these keep in the refrigerator?

Keep them in a sealed container in the refrigerator and they should be fine for up to a week. I don’t think they’d last that long in this house, but it’s good to know anyway!

Are there other varieties of this Fall cheesecake recipe?

You can absolutely change some of the ingredients in the mini caramel apple cheesecakes. If you’re a firm apple crisp or apple pie fan, you’ll find it pretty much perfect as it is.

However, if you want to make something similar but different, consider swapping the apples for pears and the cinnamon for ginger. This would be a deliciously different twist on the original. You can swap half the oats for chopped nuts, or even use fudge sauce instead of caramel.

Do you have to line the muffin cups?

I would say yes, definitely. Having these stick to the muffin cups isn’t the result you’ll want to have. So use paper or silicone liners and spritz them with a little non-stick spray oil before adding the crust, filling and apple topping. They will then hopefully slide out easily when done. 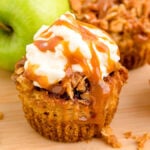 Make sure to pack the graham cracker crusts, you don’t want a loose base because the cheesecake filling and toppings are weighty.  Optional garnish: whipped cream, ice cream, or cool whip and a drizzle of caramel sauce.

Although they look fancy, these mini caramel apple cheesecakes with streusel topping aren’t hard to make. When you cross apple crisp or apple pie with cheesecake, this wonderful recipe is the result you get! 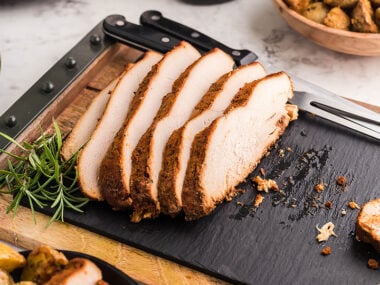 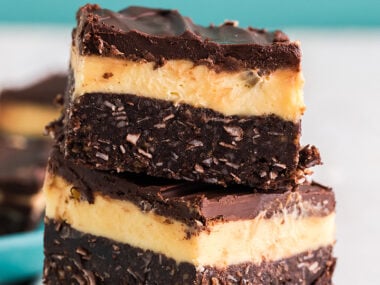 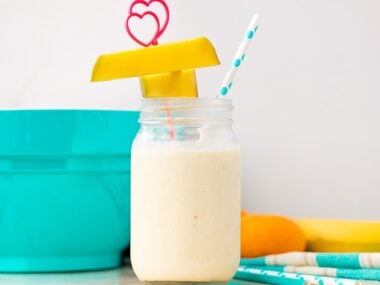