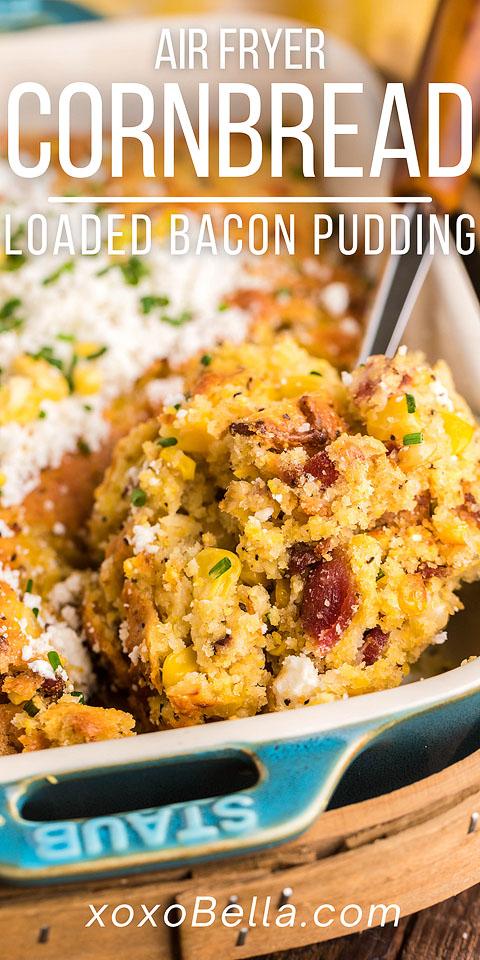 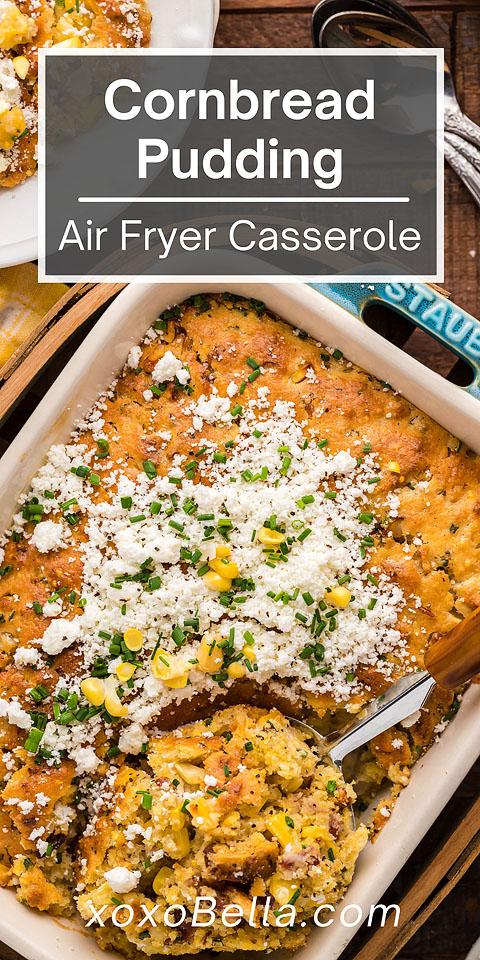 You can find corn pudding all over the South of the United States as well as some places on the East coast. Once you have tasted this bacon corn casserole, I promise you will love it as much as I do.

I like to use fresh corn in this bacon loaded cornbread pudding because it’s the main ingredient. Along with the cornbread mix, fresh corn and bacon, you need garlic, onion, chives, eggs, butter, French onion dip, goat’s cheese, and Half & Half.

This delicious side dish made with Jiffy cornbread mix is easy enough for baking beginners.

The first step in making this bacon corn casserole is to fry the bacon and crumble it. Cook the garlic in the bacon fat then add the whole kernel corn. Now you can combine the Jiffy cornbread mix with the garlic, corn, salt, pepper, bacon, and onion. Stir in half the chives too.

Once you have mixed in the eggs, French onion dip, butter and cream, you can transfer the mixture into a baking dish. Bear in mind this dish is going to have to fit into your air fryer so use something that will.

This bacon loaded cornbread pudding made with Jiffy cornbread mix will take around 24 minutes to cook. Of course there are various factors that determine the cooking time including your air fryer and baking dish shape and size. However many minutes it takes, this is still the best corn casserole out there!

Once your bacon corn casserole is cooked to perfection, add the rest of the chives and goat’s cheese on top. Serve the best corn casserole hot or warm alongside your preferred meat and you will love the flavour!

There are various ways to alter this recipe to make it the best corn casserole for you. For example, you could swap the chives for parsley, basil or cilantro, or use a different type of cheese. Goat’s cheese is good but mozzarella, cheddar or a blend would also work in bacon loaded cornbread pudding.

This is simplest made with Jiffy cornbread mix but if you prefer another brand, go ahead and use that. Perhaps you prefer to make your own cornbread from scratch and of course that is also fine.

Canned corn would work instead of fresh corn. It would yield a similar result, as would frozen corn.

How to Store Cornbread

You have to seal or wrap this bacon loaded cornbread pudding to stop it from drying out. Use an airtight box, a re-sealable freezer bag, aluminum foil, or plastic wrap.

Although regular cornbread is usually fine for a day or so on the countertop, I would recommend the refrigerator for this recipe. The reason for this is it contains cheese and bacon, so pop it in the refrigerator so it stays good for maybe 5 or 6 days as long as it’s in a sealed bag or container.

You can also freeze this air fryer cornbread pudding made with Jiffy cornbread mix. Divide the leftovers into portions when they are completely cool then seal them in freezer bags or wrap in a double layer of aluminum foil. It will keep for a couple of months this way.

Thaw it out in the refrigerator overnight. You could pop the Jiffy corn casserole in the oven while it’s frozen, but the texture will be better if you let it thaw out overnight.

Cornbread is usually fine in the refrigerator for up to a week but if it smells sour or feels moist, toss it out. Stale cornbread isn’t unsafe to eat but it won’t taste good anymore, like bread that’s hardened a little.

You might be curious about this history of this bacon loaded cornbread pudding. Cornbread is associated with Southern US cuisine and has Native American roots. 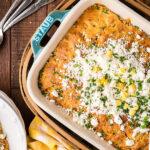 Corn, or maize, was a Native American staple for thousands of years before European settlers arrived. Although the best corn casserole is whichever recipe you prefer, I can’t get enough of this simple bacon corn casserole. Try the recipe out yourself and you will soon know why!

If you are a fan of air fryer recipes, you might also like these Air Fryer Parmesan Pesto Crusted Salmon Fillets or this Air Fryer Cornbread Cake with Candied Bacon and Honey Buttercream. 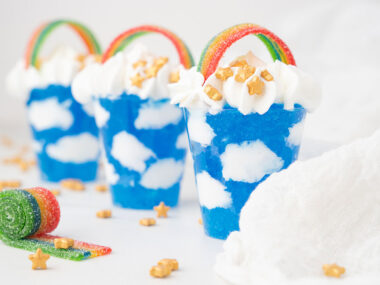 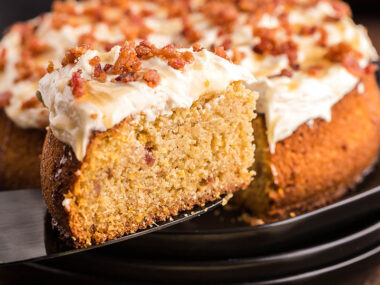 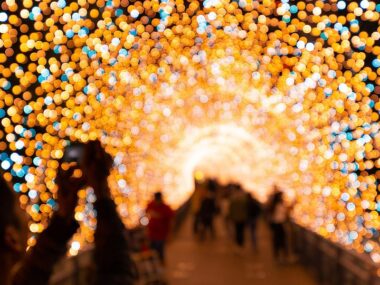 20 Things to Do in Vancouver this Christmas