The heavy cream can be whipped up with lots of air. This replaces the churning method. The result will be light, airy, sweet, creamy cinnamon bourbon peach ice cream which tastes like angels dancing on your tongue!

Brown sugar adds the sweetness to this boozy peach dessert. Cinnamon and salt also work beautifully in this no churn peach ice cream recipe. Cinnamon is wonderful will all kinds of fruit especially peaches. Use it and this wonderful dessert tastes like peach pie. The salt contrasts with all the sweet ingredients to get the sweetness level just right.

After draining the peaches you can roughly chop them. Whisk the heavy cream with the milk until it’s light, airy and somewhat thicker. Don’t let it get to the stiff peak stage. As long as it’s noticeably thicker that’s perfect.

Now you can add the bourbon, cinnamon, salt and some brown sugar and mix again. Any kind of bourbon would be nice in this recipe. I used Kentucky bourbon and the flavour was great. Another brand or type of bourbon should also be fine.

If you want to make it alcohol-free, use alcohol-free bourbon flavouring instead. You should only need a few drops. Read the label because some bourbon extracts contain real bourbon while others just have the flavourings. Brandy or cognac would also be good in a boozy peach dessert.

Add in the chopped peaches to combine, then pour the mixture into a loaf pan. I like to save about a quarter of the peaches to decorate the top and then sprinkle over the rest of the sugar.

This no churn peach ice cream recipe takes about 4 hours to freeze. It might take a little longer depending on your freezer. When serving this wonderful dessert that tastes like peach pie, leave it out for 20 minutes to soften it.

Don’t forget about it on the counter though because if it fully melts it won’t freeze back the same. The flavours of cinnamon, peach and bourbon make this a wonderful dessert if you’re all out to impress. It’s one of the tastiest treats made with canned peaches ever.

You will find this no churn peach ice cream recipe simple. It’s easy if you have a hand whisk to mix the dairy ingredients together. It’s also possible if not but will require a LOT of elbow grease on your part!

If cinnamon, peach and bourbon sound like your idea of a heavenly flavour trio, this is perfect. The fact it’s made with canned peaches and a no churn option means it’s super-easy. If you want, add more bourbon and/or peaches to the mixture. Don’t add too much bourbon though else it won’t freeze!

Use fresh peaches in this cinnamon bourbon peach ice cream if you prefer. They just need to be peeled and pitted first. Another option is to use canned peaches in natural fruit juice rather than in syrup. You aren’t going to be using the liquid anyway so it doesn’t make a lot of difference.

Whether you prefer your ice cream in a cone or in a bowl, it’s great either way. You could even add a scoop on top of homemade peach pie. This ice cream tastes like peach pie so it will definitely go well.

Another idea is to turn it into a milkshake. Add 2 cups of this no churn peach ice cream recipe to a blender. Then add 2/3 cup of milk. Blend this mixture until smooth and then divide it between 2 serving glasses and top with whipped cream. A maraschino cherry on top is a cute touch too. This has to be one of the best recipes made with canned peaches so if you have a can, make it! I guarantee this cinnamon bourbon peach ice cream is something you’ll want to make again and again!

If you like this no churn peach ice cream recipe, you might also like The PERFECT Bourbon Old Fashioned Cocktail, Copy link or Dairy Free Fresh Pineapple Peach Smoothie. 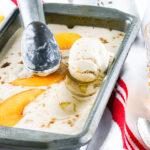 It’s easier to scoop this ice cream if you let it sit out for 15-20 minutes before serving.   If you let this ice cream fully melt, it will not refreeze well.   You can add more peaches and even more bourbon, if desired, just be careful to not add too much, as you don’t want to make the mixture too watery. It won’t freeze well this way.   You can use any peaches you like. However, if using fresh peaches, you’ll want to peel them and remove the pit before adding.   When beating the cream mixture, you do not have to bring it to the stiff peaks stage. You just want it to be nice and thickened, nothing more.

Let me know if you try to make this no churn peach ice cream recipe. It is perfect for freshly canned peaches from peach season or anytime! The bourbon in this boozy peach dessert adds so much flavour. 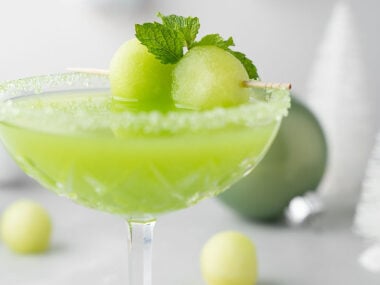