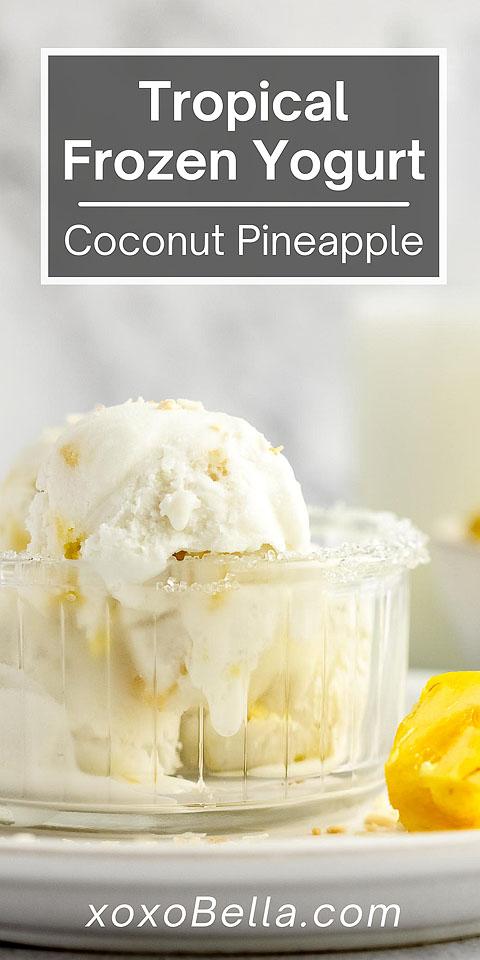 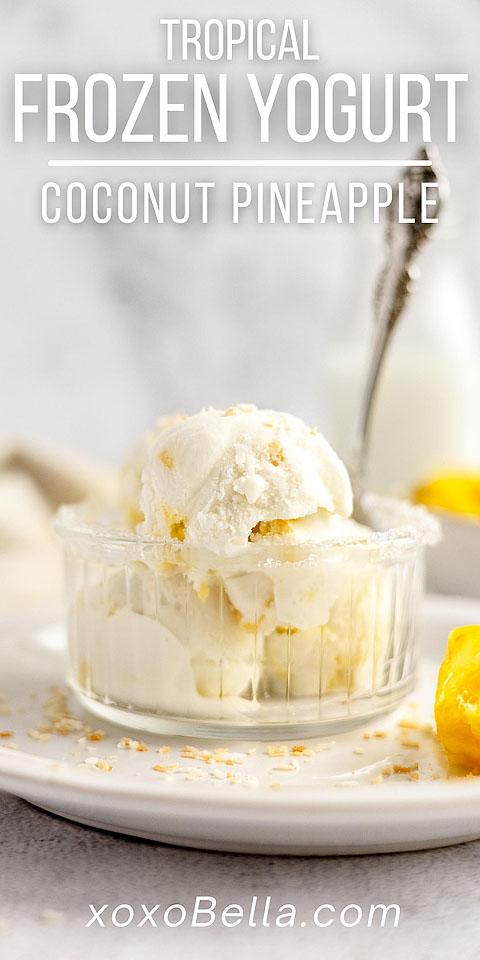 If you’re in the mood for ice cream but looking for something a little healthier, this coconut pineapple frozen yogurt is for you. Combining Greek yogurt with coconut milk, pineapple and coconut, this is the best frozen yogurt recipe I’ve made in a while. Sweetened with sugar and given a kick with a splash of vodka, it’s a real treat! If you have always wanted to make froyo or frozen yogurt in an ice cream machine, then test the waters with this tropical piña colada frozen treat.

A Closer Look at the Ingredients

You only need six ingredients for this coconut pineapple frozen yogurt. The main ingredient is Greek yogurt.

The coconut milk adds that tropical coconut flavour to the best frozen yogurt recipe. You could use any kind of milk you want and perhaps add a few drops of coconut extract instead. If you know how to make frozen yogurt you also know how you can change your ingredients and still get a great result.

The sugar sweetens this tropical pina colada frozen treat. If you prefer, swap it for agave syrup, honey, maple syrup, or your preferred sweetener. As for the vodka, omit it if you prefer, or swap it for Bacardi, Malibu, or another preferred drink. Don’t want to add alcohol? No problem, you can leave it out.

The pineapple can be fresh, canned or frozen. Finally this coconut pineapple frozen yogurt has a toasted coconut topping which offers crunch and extra coconut flavour.

How to Make the Best Frozen Yogurt Recipe

Blend the Greek yogurt with the coconut milk, vodka, and sugar in a blender, then chill the mixture. When it’s very cold, you can pour the mixture into an ice cream maker. Different ice cream makers work in different ways, so check the manufacturer’s instructions that came with yours.

When it’s fully frozen, transfer the topical pina colada frozen treat mixture into a container. Stir in the crushed pineapple and then cover and freeze. Now you know how to make frozen yogurt you’ll definitely want to try this tasty recipe!

Although ice cream and other frozen treats have been around for a long time, frozen yogurt is newer. Yogurt itself has been around for millennia but freezing it is a concept that came much later. It’s a healthier option, being lower in fat, carbs and sugar than traditional ice cream.

HP Hood, an entrepreneur, introduced frozen yogurt in the 1970s, calling it ‘frogurt’. TCBY, an ice cream company, opened a frozen yogurt shop back in 1981. By 1986, the industry had $25 million in sales. And by the 1990s, 10% of the frozen dessert market was frozen yogurt. Since then frozen yogurt has gone from strength to strength!

Can I Make Froyo without an Ice Cream Maker?

This coconut pineapple frozen yogurt is easy to make with an ice cream maker. But what if you don’t have one?

In that case you can combine the ingredients in a food processor, blender or Vitamix. Freeze the mixture until it’s partially set. Then you can cut it into pieces and beat them with a hand mixer. Finally freeze the mixture for a couple of hours or until frozen. This yields a very similar result to frozen yogurt in an ice cream machine.

If you put a sheet of parchment paper on top of the frozen yogurt before freezing it, that helps stop ice crystals forming on top. It is so easy to make froyo!

This coconut pineapple frozen yogurt makes a satisfying treat after dinner. It’s also nice for cooling off in the afternoon. You can tweak the ingredients however you want, subbing another sweetener for the sugar or switching the vodka for a splash of light rum. This is definitely the best frozen yogurt recipe if you want a tropical dessert with plenty of exotic flavour. You will want to make froyo like this all the time because it tastes so fresh!

Tips for Choosing a Pineapple:

Tips for Storing a Pineapple:

You might also like 60 of the Best Ice Cream Recipes, Magically Delicious Shamrock Shake or You Hold the Kiwi to my Heart. 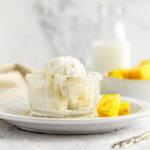 Course: Sweets
Cuisine: American
Keyword: Ice Cream
Prep Time: 10 minutes
Cook Time: 0 minutes
Chill: 2 hours
Total Time: 2 hours 10 minutes
Servings: 6
Calories: 144kcal
Author: Bella
This coconut pineapple frozen yogurt is for you and it's the best frozen yogurt recipe I’ve made in a while. If you have always wanted to make froyo or frozen yogurt in an ice cream machine, then test the waters with this tropical piña colada frozen treat.
Print Save Saved!

Let me know if you try to make froyo with this tropical piña colada frozen treat recipe. It is the best frozen yogurt recipe and full of flavour with a bit of a kick from the vodka. 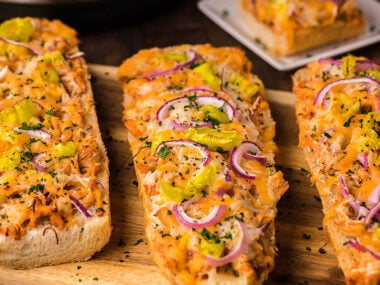 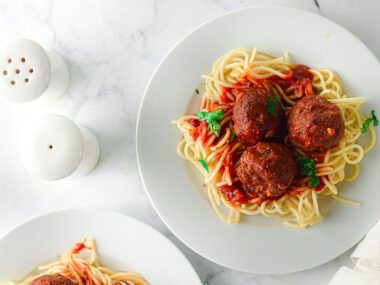 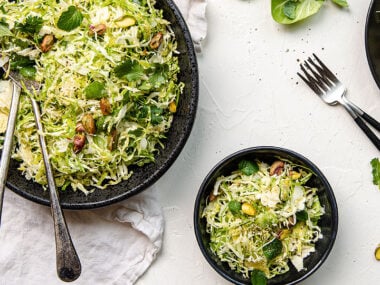