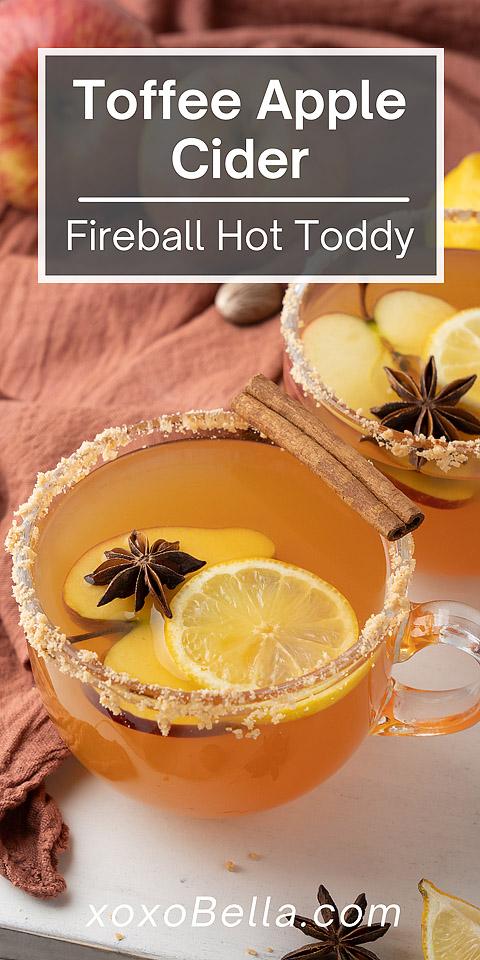 What are your favourite cocktails for the fall? This toffee apple cider Fireball hot toddy has to be in my top 3! It’s a novel take on hot toddy with Fireball whiskey. The butterscotch liqueur and cinnamon whiskey blend beautifully with this hot cider cocktail. You will love the flavour of apple cider and Fireball together in this caramel apple hot toddy recipe.

The spiced cider is made with apple cider, cinnamon, lemon, and nutmeg. Then you will need Fireball or a similar cinnamon whiskey and butterscotch liqueur. There are plenty of optional ingredients you can take your pick from. This caramel apple hot toddy recipe is nice with a crushed toffee bit rim (use lemon juice to moisten the rim first).

Garnish this apple cider and Fireball drink with your choice of lemon and/or apple slices. A cinnamon stick and star anise also make a beautiful garnish.

How to Choose the Best Ingredients

If this hot cider cocktail is worth making (and it is!) it’s worth making well. Start off with the best ingredients and you can’t go wrong.

I like to use unfiltered apple cider for the spiced cider mixture, adding in fresh cinnamon and nutmeg as well as a freshly sliced lemon. Unfiltered apple cider is usually in the refrigerated drinks aisle or you can get it fresh from the orchard. Not everywhere carries it year-round but it’s popular around the autumn. You can always use regular apple cider if you want.

As for the butterscotch liqueur in this toffee apple cider Fireball hot toddy, you have choices. The most popular option is probably DeKuyper’s Buttershots. You will be able to find this at most liquor stores. Perhaps you have another favourite in which case use that instead. Butterscotch schnapps is another name for butterscotch liqueur.

This cocktail is made with apple cider and Fireball but you can use a Fireball alternative. There are different kinds of cinnamon whiskey including Jim Beam, Jack Daniels or Johnny Walker brands. Either choose your favourite kind of cinnamon whiskey or just pick out whatever the local liquor store has on sale.

Make an Apple Cider and Fireball Cocktail Like a Pro

Once you’re ready to make this butterscotch liqueur and cinnamon whiskey drink, you will find it easy. The first thing to do is make the spiced cider. Simmer the cider with the lemon and spices for 10 minutes. And yes, your kitchen will smell like the fall when you do this!

If you want to rim the glasses before making this caramel apple hot toddy recipe, dip them in lemon juice then in crushed toffee bits. If not, you can just omit this step. Now add the butterscotch liqueur and cinnamon whiskey. Add the spiced cider and whichever of the optional garnishes you want to use.

I love this hot toddy with Fireball whisky served hot but there is a chilled version. A cold toddy if you like, although no, it doesn’t have the same ring!

Discard the lemon slices you added to the apple cider and Fireball then put it in a pitcher and refrigerate it. It should last for up to 3 days. If you don’t fancy it cold, you can warm the apple cider back up in a pan on the stove or in the microwave.

Why This Toffee Apple Cider Fireball Hot Toddy is So Popular

This toffee apple cider Fireball hot toddy is sweet, rich and spicy. I have found a number of similar recipes but this one is extra-special.

Cinnamon whiskey is becoming ever more popular with more and more brands making their own versions. And apple cider based drinks never go out of vogue. They’re such a wonderful staple for the cooler months.

So if you’re wondering what to serve when your friends come by, you won’t go wrong with this hot cider cocktail!

Serve your toffee apple cider Fireball hot toddy in mugs. You can use clear mugs like I do or else some metal ones or any kind of heatproof glass really.

It’s a caramel apple hot toddy recipe with warm spices and plenty of delicious flavour. Warm yourself up with this sweet and cozy toffee apple cider Fireball hot toddy. It’s a breeze to make and the flavour is just so amazing.

This hot cider cocktail would go nicely with some warm appetizers. You could play it simple with a spicy corn and cheese dip or homemade smoked beef jerky. If you want something sweet, buttered zucchini muffins would be a nice seasonal appetizer. This hot toddy with Fireball whiskey is perfect for fall parties and the recipe makes enough for 6 servings.

If you are a fan of this hot toddy with Fireball whiskey, you might also like Salted Butterscotch White Russian – Fall Cocktail, Apple Pie à la Mode Cocktail with Fireball Whisky and Vanilla Vodka or Easy DIY Caramel Apples – Autumn and Halloween Treat. 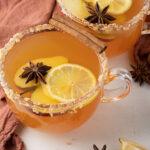 Once cooled, you can remove the lemon slices and transfer the spiced cider back to its original jug. It can be stored in the refrigerator for up to 3 days. Feel free to reheat the leftover spiced cider over the stove or in the microwave.    After you have dipped your lemon-swiped rims into the crushed toffee, you will not be able to save it for later. Any moisture introduced to the toffee will make it stick together and harden over time. Begin with freshly crushed toffee bits for each batch of cocktails you make.

So make this wonderful caramel apple hot toddy recipe the next time you have friends coming over. I guarantee everyone will love the amazing flavours in every sip. Bottoms up!

If you are looking for other holiday drink recipes, you might like this Sparkling Meyer Lemon Blackberry Jam Prosecco Cocktail. 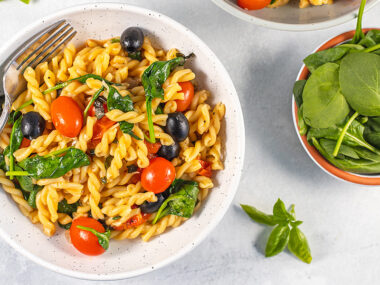 One Pot Pasta with Spinach and Tomatoes 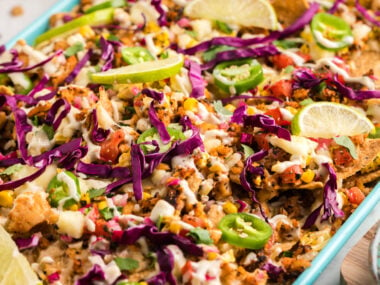