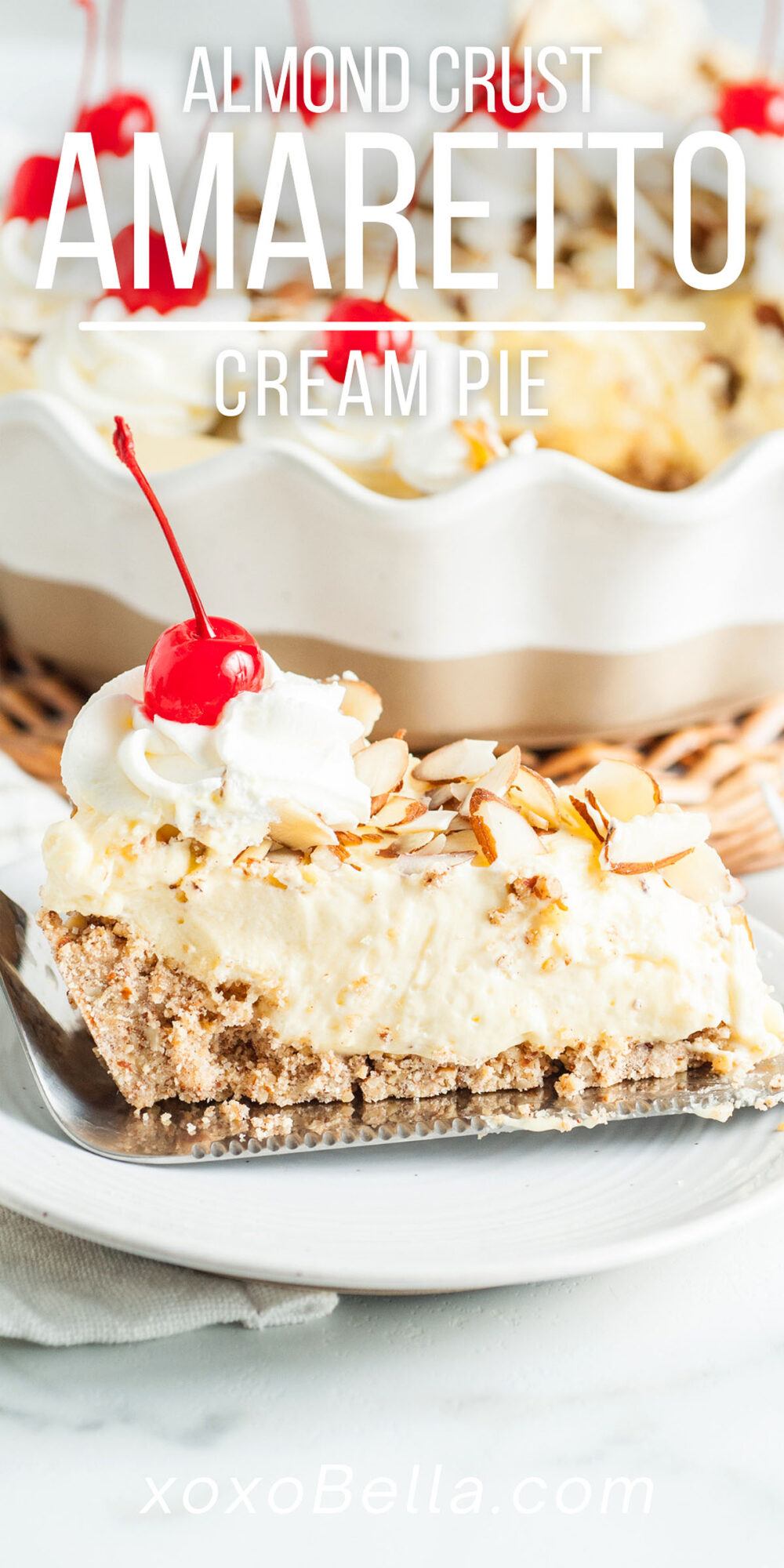 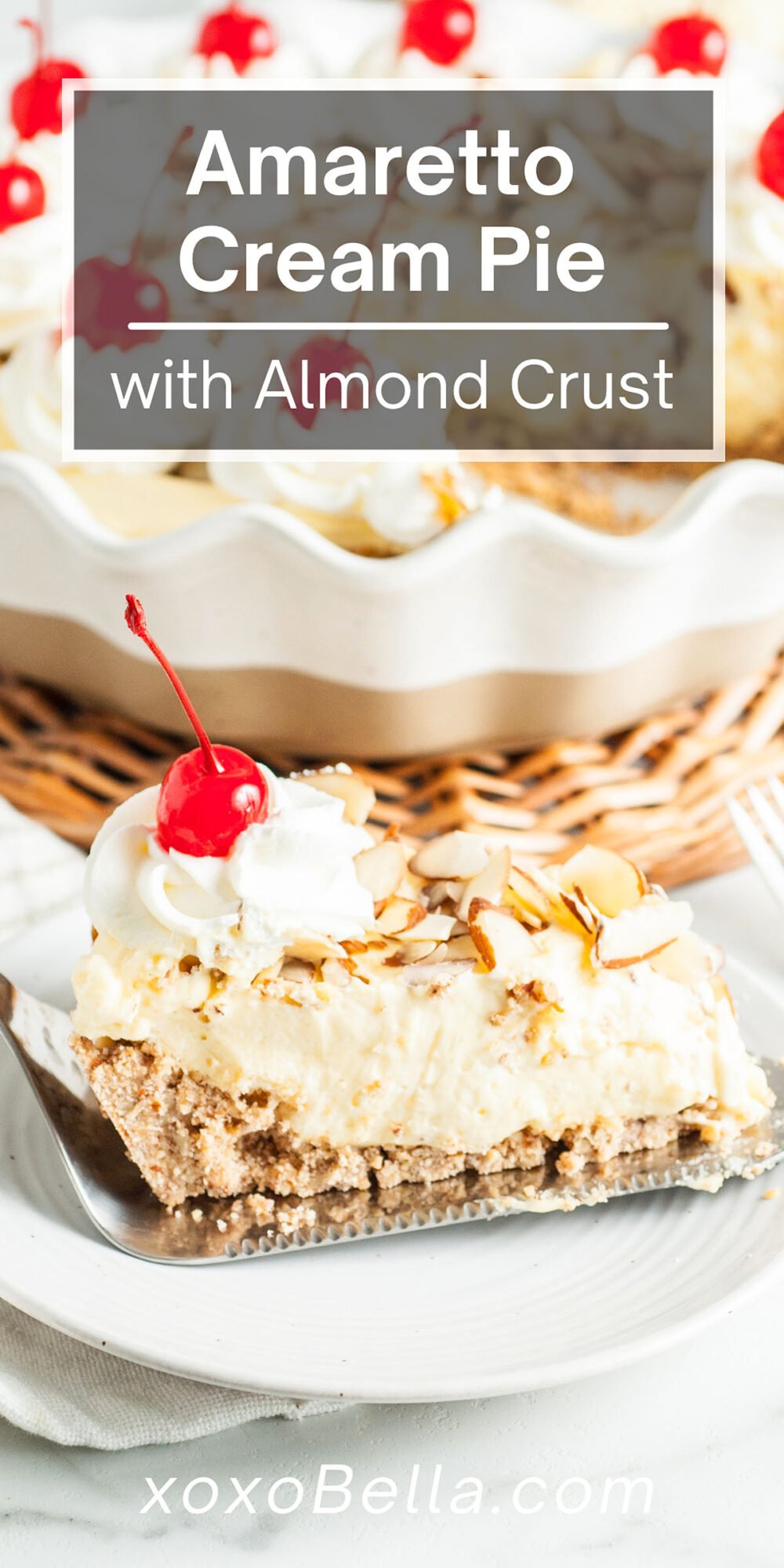 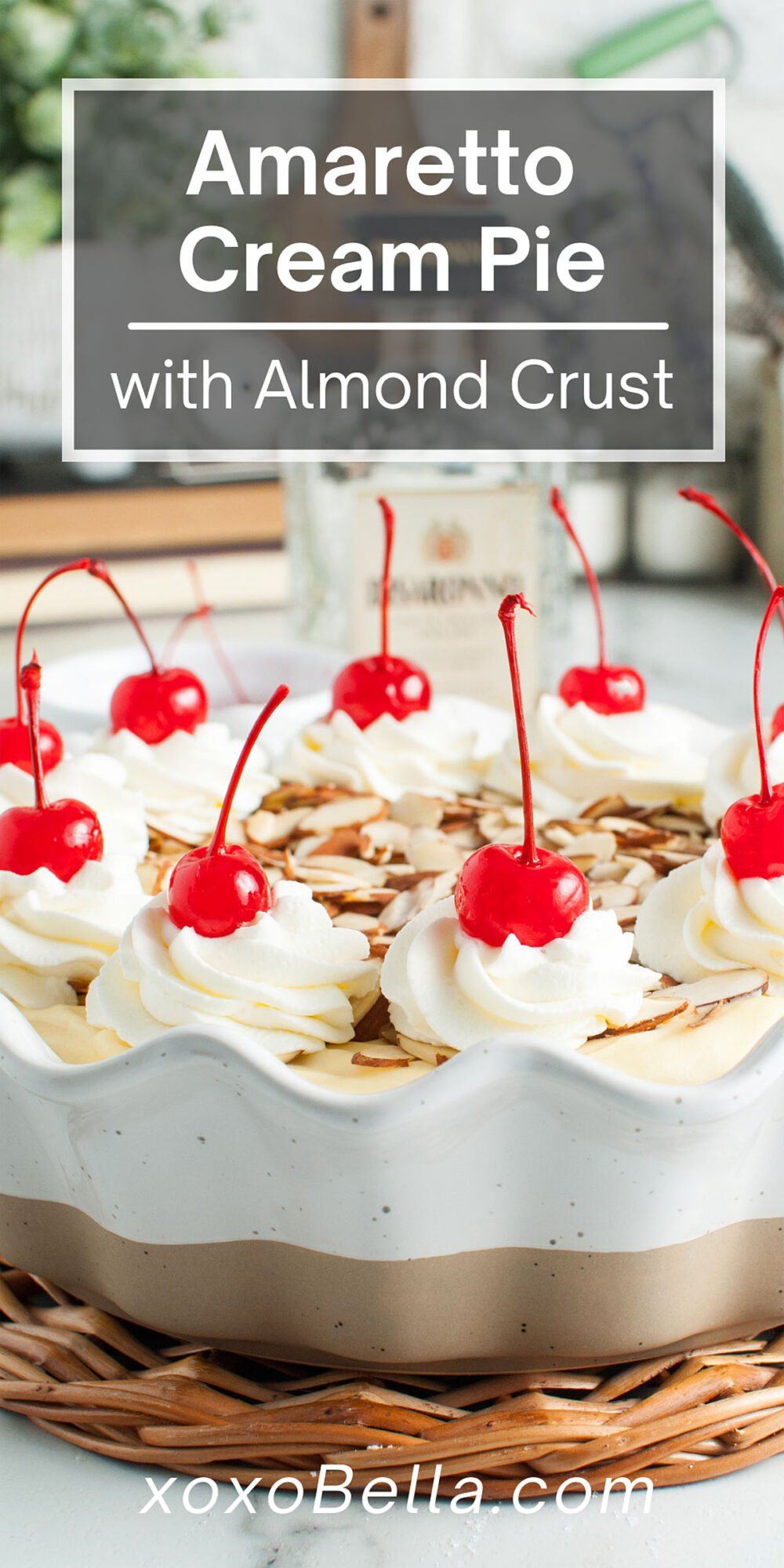 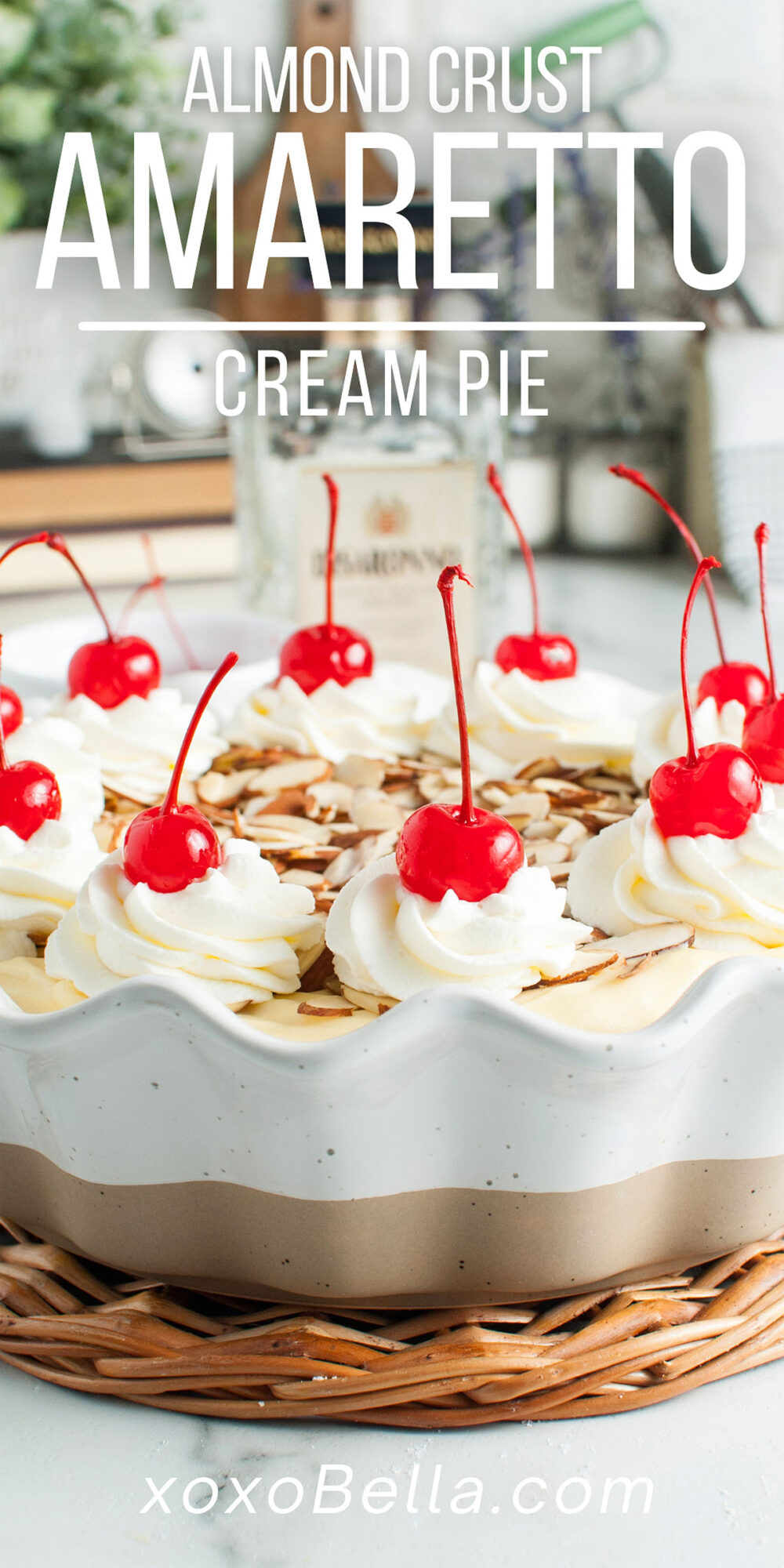 Boasting the sweetness of vanilla pudding, the unmistakable flavour of a dessert with amaretto liqueur and hints of almonds and cinnamon, this no bake amaretto cream pie is seriously impressive. Apart from the boxed vanilla pudding, it’s completely homemade, including the almond crust. This is one Italian inspired dessert you’ll definitely make more than once.

Make this no bake cream pie recipe with amaretto liqueur and you will certainly end the meal in style. It’s a make-ahead dessert, as long as you add the finishing touches just before serving.

This dessert is prepared in two parts. First you have the almond crust and then you have the creamy filling. For the crust you are going to need almonds, flour, sugar, butter, cinnamon, and salt.

The exact amount of salt you’ll need depends on the almonds you’re using. Some are very salty, some are moderately salty and some are unsalted! So the best thing would be to taste the mixture and check the salt levels. You can use either all-purpose flour or gluten-free flour in the crust. The measurement would be the same.

How to Make No Bake Almond Amaretto Pie

Pulse some of the almonds in a food processor until they’re like sand in texture then mix them with the sugar, cinnamon, salt, and flour. Next blend in the butter. Use a pastry cutter if you have one or your fingers if not. Press this mixture into the a deep dish pie pan, covering the bottom and going halfway up the sides.

Bake the crust and let it cool. Next you can make the amaretto cream pie filling. Combine the gelatine and water let it sit for a while. After that, you can whisk the heavy cream with powdered sugar until you get stiff peaks. Mix the pudding, milk and amaretto together and fold in most of the whipped cream mixture.

Next, transfer the cream pie recipe filling into the crust. Chill it for several hours. Don’t skip this part else the filling won’t set properly and you’ll have a gloopy mess instead of a set custard filling!

When you’re ready to serve this Italian inspired dessert, add sliced almonds on top and then whipped cream and maraschino cherries.

A Closer Look at Amaretto Liqueur

If you’re going to make this dessert with amaretto liqueur, you might be wondering about the liqueur. Disaronno is probably the most famous amaretto but there are other brands. Amaretto is an almond liqueur which is nice in dessert recipes as well as cookies or indulgent after-dinner coffees! Although it is often made using apricot kernels, almonds can also be used for flavour.

How far ahead can you make almond amaretto pie?

As with many sweet treats, this dessert with amaretto liqueur is best served as soon as you’ve made it. However you can make it a day or so ahead if you need to. Don’t add the nuts, whipped cream and maraschino cherries until just before serving though. That way it will look fresh and perfect.

Can you make this cream pie recipe alcohol free?

Although amaretto doesn’t feature in the almond crust, it is a key component in the filling. However, if you want to make this Italian inspired dessert non-boozy, that is possible. Use amaretto extract in place of the amaretto liqueur. Different brands have different strengths so start with a couple of teaspoons. You can also check the packaging to see what the suggested amaretto liqueur replacement would be.

Can you make this with a different flavour of pudding?

Try coconut cream pudding or lemon pudding for a different twist on amaretto cream pie. You can also swap the amaretto for Malibu rum, Limoncello or even Kahlua. The great thing about this recipe is pretty much any liqueur and pudding flavour will work. So if you want to get creative, let me know how it comes out! 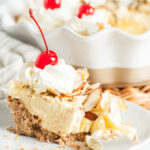 Depending on what kind of almonds you get – salted, unsalted, lightly salted – you may need more or less salt in the crust. Give the crust mixture a taste before baking to make sure it has a salt level that suits your preference. Use gluten free cup-for-cup flour to make gluten free 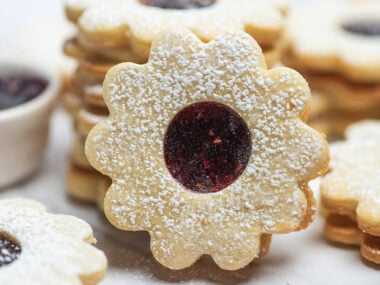 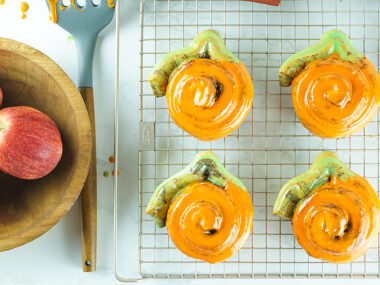 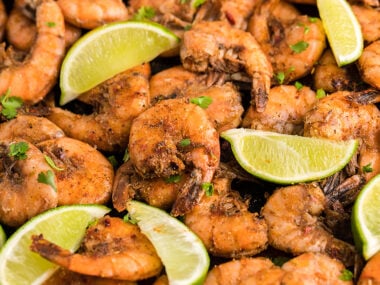